Negligent Security Can Lead to Serious Injury or Death

Negligent Security Can Lead to Serious Injury or Death

What exactly is negligent security, as it relates to the justice system? It falls under the scope of premises liability. Property owners have a duty to keep their spaces safe for visitors, including preventing slips and falls and similar injuries. But negligent security takes that a step further and argues that if a property owner doesn’t provide sufficient security and a visitor is the victim of a crime, the property owner could be held liable.

To prove negligent security, the victim must show that the property owner failed to provide whatever level of protection necessary for the property, and demonstrate that it was specifically this lack of security that caused their injuries. The bottom line: the owner or property manager KNOWINGLY fails to provide proper security to their visitors.

Recently, a $4.2 million settlement was reached in a negligent security lawsuit against a realty management company after one of their senior vice-presidents admitted that the security of visitors on the property was not their number one priority. In this case, Dwight Higgins was shot and killed during an attempted robbery at an apartment complex. The complex had a long history of violent and nonviolent crime, including three shootings in the three months leading to Higgins’ death. But the consequences of sloppy security can be found anywhere and everywhere: 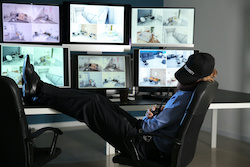 Typically, the owner of the property is responsible for ensuring adequate security. However, if another entity has agreed to take over aspects of a property’s upkeep, that entity may be partially or fully liable as well in a negligent security lawsuit. Depending on the situation, liability could lie with:

If you have been injured or attacked due to negligent security, the first step is to get to safety and make sure any injuries are treated. Here are some next steps: